I couldn’t sleep again! But the nap after race #1 must have been enough because I was functioning fine. Instead of rolling around I got up at 2:30 and started getting the Donald Duck disguise put together and had the standard peanut butter and banana toast race-day breakfast.

My Uber experience was perfect today. We followed the runDisney directions and I ended up in the drop-off/taxi/bus lot where I should have yesterday, and then I walked a couple hundred metres to join the mass crowds from the event transportation from resort hotels and walk to the starting area. Easy. After that simplicity, I now fully recommend my accommodations to others travelling here for a runDisney event!

Almost immediately after entering corral B, I met up with my new friend Dave from yesterday! Unplanned too! We decided to meet in the Reunion Area afterwards and he would give me a lift back to my place since his Marriot hotel was close! I am telling you this because despite what you may think, travelling to a racing event alone is not lonely. Everyone’s here for the same reasons and the majority are happy, excited and into meeting new people, especially the other solo runners. Tons of people come here on a family vacation but just the mom or dad takes part in the running events, or one person is running who travelled with their non-runner spouse, etc. It’s like when you are in the single line for the chairlift at the ski hill, you just don’t actually have to yell out at a bunch of strangers that you’re alone haha.

The 10km had a different vibe than the 5km. It is timed, for one, and not considered a fun-run event. I LOVED IT! But to be honest with you, the first half of the race is not in a Disney park, it’s around it.

I thoroughly enjoyed this race! Even the road running was fun, with so many people and the good energy, almost felt like half-regular racing event, half-Disney event. There were still characters on this part of the course which was awesome. There were a few short, gradual uphills and downhills, and it was kind of a nice warmup to be feeling really good once we entered Epcot around the 5km mark. The second half we ran throughout Epcot, the scenic World Showcase and Disney’s Yacht and Beach Club Resorts. There were way more spectators than yesterday and I loved running on the boardwalk. This place is unreal! Personally, I was feeling amazing and loving the “GO DONALD!!!!” and “I LOVE YOU, DONALD!!!” that I was getting from the spectators and cast-members! Note, I plan to buy my race pics and that’s why I am posting this proof. There are mixed viewpoints on if this is okay or not, so had to let you know.

At some point during this race I officially picked one of my multiple weekend strategy options which was:

I did very well for myself and was feeling great after crossing the finish line, but made sure to chug one of the Powerades given out right after the medals (omg look)

and drinking a ton of water and eating a banana immediately. I found Dave easily, who also had a good run he said, and then as soon as he dropped me off at home I ate a Clif Builder protein bar from the race snack box, another banana, more water and the elixir of life: CHOCOLATE MILK. No room for laziness in recovery on a weekend like this! I did a full-body stretch, showered and cleaned up a bit to keep my body moving a little more, and then got into bed for a 4 hour sleep.
I didn’t take many pics today, and I don’t have a ton to report that was different from yesterday, but one thing I didn’t mention was how much discussion was going on about the potential rain and lightening forecasted for tomorrow. All the talk was not creating a good vibe in the corral so I ignored and enjoyed my Prince Rupert rain-tolerant mindset. But now I have to tell you the worst thing ever. 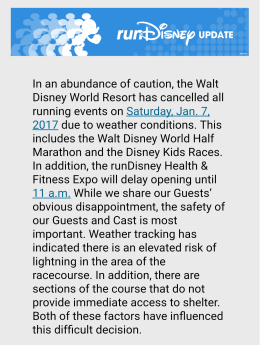 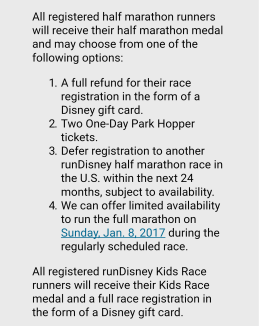 Yes you read that correctly. All races tomorrow are cancelled. Not even lying. Heartbroken. I’m more than a little upset right now. There is lots of talk happening on Twitter about meet-ups being organized by angry Goofy Challenge and Dopey Challenge participants to run the half-marathon distance at some point tomorrow on their own accord. I haven’t decided exactly what my plan is, but Ches from The KOR Project and I have decided to run 21.1 km at some point tomorrow. It will be at a very easy recovery pace. I can’t accept my Goofy and Dopey medals, and rock the race challenge shirts (which are actually nice, I am VERY picky and rarely like race shirts) unless I run a half-marathon distance tomorrow. So I’ll keep you posted on what happens. There is loud thunder crashing and a downpour happening as I’m typing this so I get it, Disney is doing their job with respect to safety, I just wish they would have waited to make a more last-minute decision in the case that this storm has passed by the early morning hours…GAHHHH!!! Talk to you soon!