to go quickly by moving the legs more rapidly than at a walk and in such a manner that for an instant in each step all or both feet are off the ground.

Exhilarating! Or as my one guy-friend always reacts: “Ew.” hahaha

Aside from soccer and punishment at volleyball practice, my running background consists of a five year track & field career at King Edward Elementary School in the 90’s. There were a few times here and there in university where I’d randomly get the motivation to go for a jog, but it was usually because I was hungover and feeling guilty about my present situation, forcing myself outdoors to do something physical. Or, because it was so beautiful in Vancouver I’d get a vision of going for an effortless run along the seawall or in a pretty neighbourhood, feeling and looking fit while doing it. Each of those few and far between jogs was a blunt reality check. Running is really hard. It’s even harder when you never do it, expect it to be easy like it’s made to look in magazines and on TV, and when you drink five days a week. I’m surprised that I went more than once. Maybe those jogs were far enough apart that I kept forgetting how much it sucked the last time? I couldn’t tell you why I continued to go for a jog once every six months. LOL. Maybe I subconsciously knew that one day I’d get more consistent and it would change my life a lot.

Fast-forward to 2013. I went to LA for a month for yoga teacher training and had to fill out a brief “about me” questionnaire. A small poster of each of the 60 yoga students was made and put on a big wall so we could read about everyone in our new Sangha. I still have that poster, see 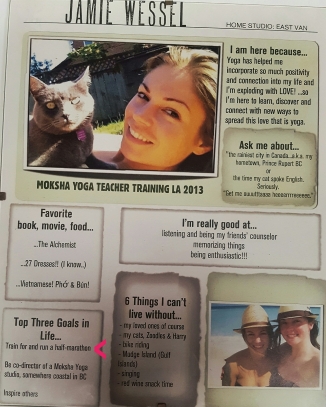 I don’t know exactly where the half marathon goal came from and I’m not even sure I knew it was 21.1 km. Like I said, I had maybe gone for ten runs in my 27 years alive at that point, and all of them were basically torture. I was in better shape than in university, doing a ton of hot yoga and taking better (but not the best) care of myself, and at that time pulling myself out of a very sucky section of my life. Looking back, I’m pretty sure I needed something BIG to work towards, and to be held accountable by more than just myself.

One of my new friends in LA, Jill, (who I saw on Disney Weekend!) was training for a marathon while we were becoming Moksha yoga instructors. I saw her running to and from yoga school with a backpack on. I couldn’t even process the thought of running a marathon, or doing anything on top of the 12 hour days, 6 days/week we were in training. I didn’t even know how long a marathon was. Another new friend, Megan, casually told me she had also run a mararhon once! These girls blew my mind. When I got back to Vancouver that March that goal seemed even more appealing and I kept hearing ads on the radio about Team In Training, an opportunity to train with coaches for an endurance event while fundraising for the Leukemia & Lymphoma Society of Canada. The ads said it was for all levels, including beginners. I’m sure a five or ten kilometre running goal would have been fine for me, a beginner, but no I went and signed up for the Nike Women’s half marathon in San Francisco the following October.

The first group run was an ugly 4 km. I almost died. I think I had to buy a pair of shorts because I didn’t own any suitable for exercising in, and the shoes I wore were from Bata in Prince Rupert in 2001. I couldn’t talk to the other girls I’d just met, because I COULDN’T BREATHE. The coaches implemented run-walk training, so every 10 minutes we walked for 60 seconds, and somehow I survived that day. When we got back to Granville Island where all the group runs started and finished, I was so happy it was over, but also so proud. Like, I could not believe I made it. When a person does something that they thought they couldn’t, shit starts to happen. I’m not going to go over the details of that 20-something-week training program, but every weekend I’d come home from Granville Island and be all sweaty with a huge grin on my face, exploding with endorphins and yelling to my roommate about how I JUST RAN EIGHT FREAKING KILOMETRES!!!! Then 10, 12, 14, 16, 18, and eventually 21.1! It was always hard. It is always hard. But while I was dragging myself out of bed to meet up with strangers-turned-friends every weekend, doing difficult things together, feeling great at times but shitty at others, other stuff was happening too.

When a person does something that they thought they couldn’t, crazy shit starts to happen.

Growing self-confidence. Trust in my physical abilities. Realizing that I could do intimidating things without my parents, best-friend, sister or boyfriend right beside me. I had a new way of looking at shittiness: temporary. A long, steep hill would come up in our running route when I was already struggling and at times, the effort level seemed too much and I’d walk, but then at the top I’d resume running and it felt a bit better again. As if I was going to sit down on the sidewalk, refuse to get up and call a cab to take me back to my car at Granville Island.

As if I was going to sit down on the sidewalk, refuse to get up and call a cab to take me back to my car at Granville Island.

Steady forward progress. I mentioned that I don’t have a runner’s background, but I do have a background of anxiety, depression, terrible self-esteem and co-dependency. Holy personal, I know, but the goal is to to make this more relatable to at least one person reading it.

My mental health started improving, simply by getting my heart rate up three times a week, sweating and giving myself the endorphins I was lacking for so long. I had a new running family of people who I wouldn’t have met if I hadn’t signed up for Team in Training. Without knowing it, just by wanting to say “I ran a half marathon” I got improved self-concept, positive vibes, respect for my physical health, positive body image and feeling strong af, camaraderie that didn’t revolve around alcohol (not all my other friends were just drinking buddies, for the record,) an understanding of mental toughness, and independence. I had a new interest, and it was so effing interesting! What I thought was just putting one foot in front of the other (which running essentially is, yes) was so much more than that! Body mechanics, breathing techniques, fueling, recovery, nutrition, ACTIVEWEAR (please watch that hahaha) fifty billion super fun running events all over the world to look into (some with COSTUMES)…it was never-ending. It IS never-ending.

The running community deserves special recognition. I know that a common interest brings people together, regardless of what it is. Whether you’re into running, fixing cars, yoga, World of Warcraft or quilting, it doesn’t matter, but the one that I have experience with happens to be the running community. And it’s not just my closest run buddies or our extended run crew in the town where I live, (Rupert Runners shoutout) it’s also online. A perfect example is the #WeRunSocial meetup that I showed up to at Disney Springs last week in Florida; getting together with sixteen strangers who I’ve never met in person, but whose running journeys I follow online and get motivated by all the time. Runners just get it. Everyone lifts each other up and that’s an incredible thing to be a part of.

Now it’s four years later, but I still experience all of these benefits all the time. The Runner’s High is real. Setting goals lights a fire under my ass. Any bad mood, shitty day at work or disagreement with husband is usually GONE after a stress-busting run. Seeing progress makes me feel joyful, and a lack thereof is a learning experience. Crossing any finish line, including walking through the door once you get back home from a run, is one of the best feelings there is. I think I speak for more than just myself when I say that building confidence, endurance, mental strength and physical health are goals that do not have endpoints, and that we can all work on and feel good about forever. Proving to yourself that you are stronger and more resilient than you thought you were is so f*%king cool!!

Proving to yourself that you are stronger and more resilient than you thought you were is so f*%king cool!!

So yeah. That’s why I am so obsessed with running, and from what I gather, lots of these reasons are why other people are also obsessed with running. It shows us how strong, passionate, resilient, perseverant and confident we actually are deep down, all within a supportive community of others working through and towards similar things.

It shows us how strong, passionate, resilient, perseverant and confident we actually are deep down, all within a supportive community of others working through and towards similar things.

Maybe the goal is to run for thirty minutes without stopping. Maybe it’s to take one minute off your marathon time. The self is such great competition because you can lace up and face yourself any time, any day, anywhere. That competition will teach you something every single time, and it has made and continues to make me a better version of myself.

*contact me if you have any questions, or if you live where I live and you want to go for a run! Even 1km.*

ALSO check out Project Start!!! You can also find them on Instagram here 7 thoughts on ““Why are you so obsessed with running?””