The Calgary Marathon, eh. I’m going to be honest in this review, and I’ll start off by saying it wasn’t the best race experience I’ve had, but overall my weekend was very fun!

First off, how did I come to register for this race? Well, I wanted to run a spring marathon, already ran BMO Vancouver in 2016, it’s in Canada, and there was a big theme around Canada’s 150th birthday, which sounded fun. I looked at the course map and profile and it looked alright, so I went ahead and registered…more on that to come. LOL. Don’t get me wrong, I don’t seek out marathons to run simply based on the course profile. However, I am still new to the 42.2 km distance. I’m working on getting familiar with the beast that is the marathon, and trying to improve at it. So yeah, I don’t look for difficult courses at this point in my marathoning!

After I registered, my friend Jeph told me about a flag bearer contest that the Calgary Marathon was holding. Represent your province or territory plus receive complimentary travel, accommodation and registration! We both entered, but since Jeph lived in Quebec at the time, he didn’t actually plan to run Calgary unless he won the contest, understandably. Pretty far! I wanted him to win soooo badly! They were vague about what they were looking for, and how and when they’d select winners, and then after Tweeting at them repeatedly, they stated that the winners would be announced at the end of November. But then it was next week, then in a few days, etc. Then after saying that, they put out a last call for applicants! They finally revealed the winners in mid-January, if I remember right. The site for entering was terrible and you could see who else had entered and it was barely anyone, so our hopes were high! I kind of got a bad taste in my mouth cause it seemed like Calgary was out to lunch on their organization. Lol. Neither of us won, if you were wondering hahaha.

The other thing before race weekend that had me a little skeptical was when I emailed to have my predicted finish time updated slightly, (I was registered over 6 months in advance) and the reply informed me that the start chute is self-seeding so I’d be lining up wherever I wanted. Um, then why did they need a predicted finish time? The half marathoners, full marathoners AND the 50k ultra runners all start at the same time in this race. No corrals? Hmm…it’s not a huge race by any means, but it’s not tiny! I think this year they said there were twelve thousand participants over the course of the weekend.

Anyways, my travel to Calgary was painless (thank you, West Jet!) and I arrived at the host hotel, the Westin, to find it was FANTASTIC. Great hotel, a Starbucks and The Keg attached, plus another hotel restaurant and bar area, super clean and even kinda fancy. Most importantly, they had a race shuttle that got us right to the start area with no waits or stress.

The Westin is in a great location and my 3 mile run on Saturday morning was around the  Prince’s Island Park area and so beautiful!

Later in the afternoon I took a nice slow walk to the expo at the Big 4 Building at Stampede Park, but it was  further than I thought and I’d definitely Uber next time. As for the expo, it was pretty basic but very quick and easy to get bibs and shirts. 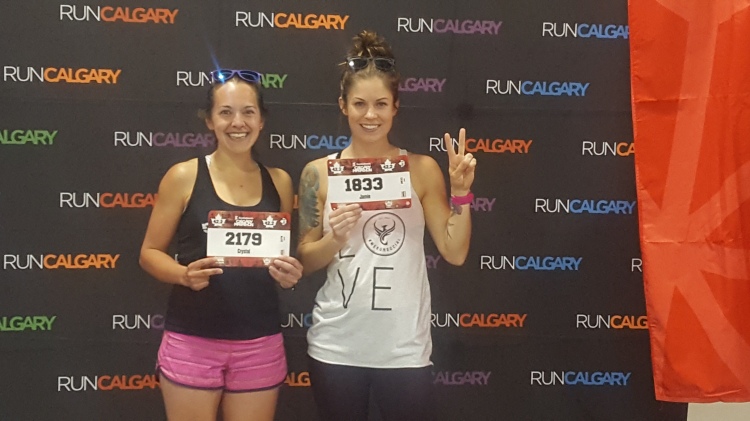 I am not a fan of the race shirt, as many other people I talked to weren’t. There is gorgeous artwork on it, it just looks dumb on a shirt!

Also, the shirts are identical for all six different events (5k, 10k, half, full, 50k ultra and 150k relay/solo) with the only difference being the distance on the back. It’s too bad, because it’s fun when you’re super proud of the distance you tackled and get to wear your race top with your chest puffed out haha. A complaint I have about the expo was there was nowhere at all within or nearby (that I could find) to get anything to eat or drink! Obviously I brought a bottle of Nuun with me but when I ran out I couldn’t believe there was no water. Didn’t even see a drinking fountain to refill my bottle, though I’m a bit blind. Being hungry/thirsty isn’t something I’m into ever, especially not the day before a marathon. I know a race expo isn’t a food fair, but they can be fun to hang out at for a while and people spend a fair amount of time at them in some cases!

Crystal joined me at the Big Four to grab her package, and then we met the #werunsocial crew out front at the fountain for a visit and some pics.

From there we easily took the C-Train back to the downtown core and walked the two or three blocks back to the Westin.

Come race morning, Crystal and I arrived at the start around six via our hotel’s school bus shuttle, very easily checked our gear bags, and had no long waits for toilets inside the building or for porto-potties either. At this point, the porto-potties were still super clean and non-stinky. Bonus.

It wasn’t actually that bad getting into the start chute where I wanted to be, but I was in there by 6:45 and wouldn’t have wanted to try to squeeze in closer to the 7 am start. There was a massive line of runners shuffling in through one of the chute gate openings around the 3:45 marathon indicator flag a ways up in front of me, and they all just slowly merged in as the race began. I don’t actually know how anyone but the full marathoners were supposed to know where to go, unless they could find a pace bunny for their distance. I only saw big red flags for certain marathon times. Not much order, but I didn’t encounter any problems with it at all. Like YogiCrystal told me, just get there early and get into the chute where you want to be before it becomes a sardine can. This would have been a big problem if I’d needed one more bathroom visit before starting…

This race course has so many turns, but I managed to run the tangents much better than at Disney! I thought it was a nice course, pretty decent scenery-wise and less residential than Victoria, if I’m remembering correctly. There were lots of excellent aid stations with water, Ultima, some with Honey Stinger gels (not my jam, but still awesome) and cold sponges! The course description said thirteen aid stations I believe but I felt like there were more. Maybe both sides of the out-and-back portion counted as one. It was very well-aided! Okay. But now let me show you this. HAHAHAH

If I had know the course was this difficult, I think I would have have still registered, but I most definitely would not have come with a huge goal! I have to say I think it’s lame that Calgary uses this depiction of their marathon’s profile. Extremely misleading! Here’s another version of it on findmymarathon.com that I came across as well.

Combining this course with late-May hot weather (at least for me, coming from the mild north coast of BC) and my race plan was out the window. I’m very proud that I accepted this without becoming completely heartbroken or miserable. The fun of the Canada 150 theme, the spectator support (especially Lululemon YYC!) and my newfound love for the city of Calgary, and I managed to let go of the fact that this was nothing at all what I was expecting. I’m so happy I was able to finish the race with a good attitude, aside from a few hiccups. It was a serious struggle in the sun and knowing that a PR was out of reach, but I didn’t go to the dark place. Even though I fueled like a boss with Huma Gel, Clif Shots and Salt Stick Chews, my stomach still felt like it was eating itself and my legs felt like complete jello, but I made it.

Crystal had caught up to me by kilometer 39 and we took on the end of the run together. As we were running down the final hundred meters to the finish, I grabbed her hand and we finished together and it reminded me that running a marathon is running a marathon. It’s hard AF and a huge accomplishment to cross the finish line! Love my training buddies!

The post-finish line area was great! There were some outside showers to wash off the salt all over us, lots of photographers to take our pics with the SWEET gigantic toonie-like medals that are also BELT BUCKLES hahaha, and there were lots of bananas, water and Ultima. I honestly don’t remember if I was given any other snacks because of post-marathon brain, but I know there was a tear-off strip on the bibs that could get you food somewhere after exiting the immediate finish area. It was also really nice that everyone got a cloth shopping bag from one of the sponsors, made it easier than trying to carry water, banana, possibly headphones for some people or a handheld water bottle like myself.

I have a bad habit of going home the day of the marathon. I like to go home! So I went back to the Westin to clean myself up and eventually make my way to the airport in an Uber. Sigh. I am never doing that again. Next time I’m planning a longer trip around the race. Thankfully both flights were just over an hour and I did a lot of stretching (and eating and drinking) at the airports.

During this marathon I discovered that I’ve become a much more mature athlete. Am I really sad that I didn’t run the sub-4 marathon that I’ve been training towards for months, or even come remotely close? Of course I am. But like I’ve said before, I’m a person not a robot, and on Sunday I was too hot, feeling weak and delirious and was getting my ass kicked too badly by the incline to execute my plan. I also was running a course nothing like what I expected! So I’m good! I have a 14.2 km race to run next weekend in leg 10 of the Skeena River Relay, and then it’s time to rest! Next marathon is in December and will be my only main focus of the fall, and I know Coach Andrew will help me be really ready for it.

Overall, I am glad that I went to the 2017 Calgary Marathon Weekend. I enjoyed the city, the event theme and the spectator support, and the host hotel was great. Personally, I think they should update the scale of their race course profile, and re-think the organization of the starting chute, and I think they should consider making the race shirts unique to the various distances.  I had a great weekend, but not outstanding enough to return since it was a ways for me to go. If I lived in Alberta and it was closer to me, I would likely participate again, but not with any goal aside from possibly a course-PR.