If you don’t know about the #sportsbrasquad, here’s a quick and dirty run down for you.

Kelly Roberts, also known as RunSelfieRepeat, was on a hot, sweaty run last June and was thinking about how f*cking glorious it would be to rip her shirt off instead of having a sweat-soaked top stuck to her skin. Thankfully, against the odds she won the all-too-familiar debate with the inner critic about what she’d look like, how she’d feel and what others might think or say. She ditched her shirt and continued on, far more cool and comfortable. You can read all about it at RunSelfieRepeat.com. Reflecting on the experience afterwards, the #sportsbrasquad was born and Kelly started her movement. Mission: empower women to embrace the strength and ability of their bodies; destroy the stereotype of what a healthy and fit body is “supposed to look like” based on a lack of representation of different body types in the media. Change how the world recognizes STRONG.

Oiselle, one of Kelly’s sponsors and my favourite running brand for whom I also run for with the Oiselle Volée, got right behind the movement. The world needs a reality check on how broad the spectrum is. We need a better representation of real, healthy women and the diversity of shapes, sizes and body types that strong and healthy exist as.

I believe in this. I love what Kelly Roberts stands for. I love that Oiselle is all for women in sport; all levels and all bodies. Oiselle and Kelly declared June 24th as #sportsbrasquad day, so I decided to establish the Prince Rupert #sportsbrasquad among all the others popping up around the world.

On June 24th at 7pm, the Prince Rupert Chapter was born! 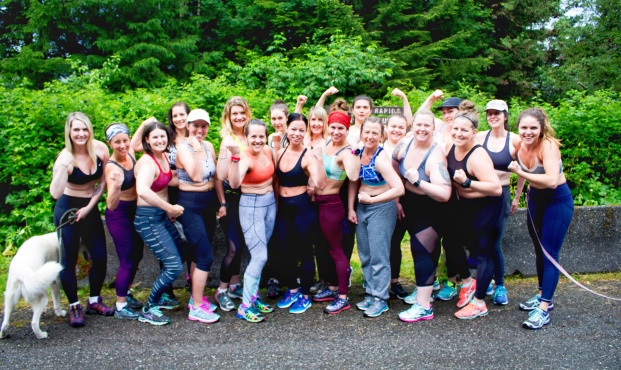 But why? Why is over twenty women, from best friends to perfect strangers, gathering to run without shirts on, such a big deal? And why do women care so much that they organized their own bra-crew runs earlier in the day if they weren’t able to attend the event? 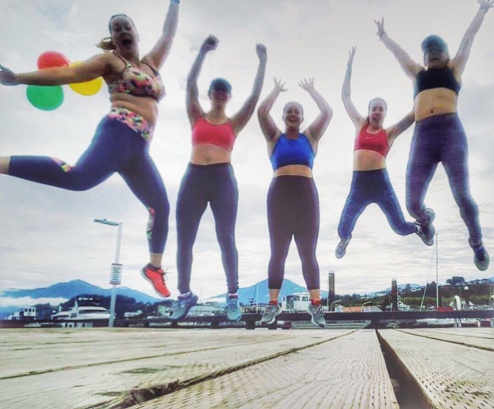 Because the issue behind this movement is so real and it affects everyone. The inner critic is real. Comparing one’s self to others plus totally restricted image standards, a completely self-sabotaging thinking habit, happens to be extremely common, and some might even say it’s human nature. The generally accepted health and fitness standard represented in media for decades has been a thin, very small-framed woman with basically zero body fat (possibly with the exception of full breasts), smooth, even, tight skin and whose flesh somehow isn’t affected by gravity. There is absolutely nothing wrong with this woman (the real one, under the makeup and airbrushing), but she does not represent WOMEN. She represents ONE out of eighty kazillion body types. 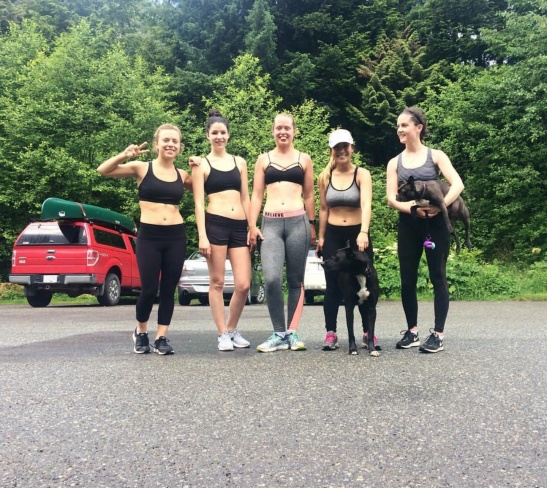 another crew out for the cause!!!

The simple fact that a standard has come to exist is the problem. Show this standard on every TV show, movie, commercial, magazine and billboard across lifetimes and it’s no wonder there has been a mix up regarding what healthy and fit “should look like”. Why has it ever been about appearance over function?? 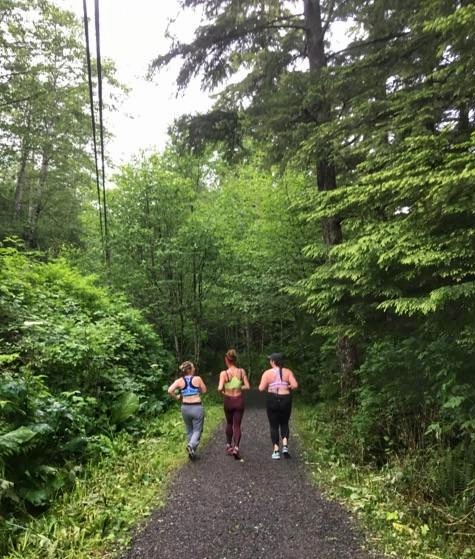 News flash, mankind: healthy is a feeling, not a look. It feels strong AF. It feels like goals, challenges, effort, victories (and failures), growth, revisions, sweat and endorphins. Self-care and self-love! Maybe throw in an ugly-cry for good measure! This all relates to what our bodies are capable of and how empowering it is to exercise those capabilities. 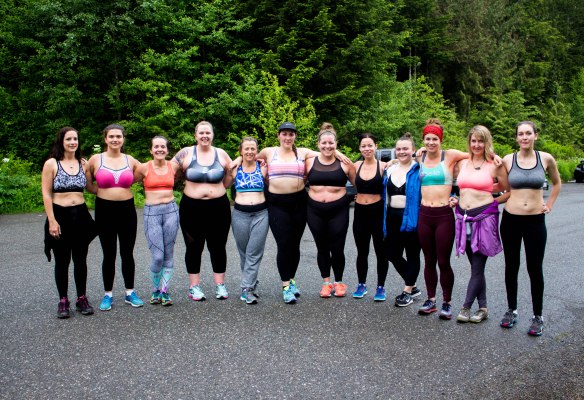 Getting the ball rolling in the healthy and strong department can be really scary and really hard. Keeping that ball rolling is a whole nother story. Add on the fact that we ALL have our insecurities…those spots that are immediately apparent to us (and probably only us) when we look in the mirror or see a photo of ourself. Take into account the useless comparisons we make. Finally, top it off with the sad but true habit of judging one’s self more critically than any friend, acquaintance or sister, and people, we have a problem. 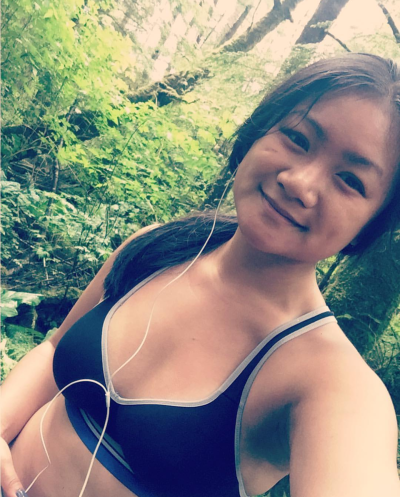 Christina went on a solo mission and killed it!!

Think about how you identify with the word Christmas tree. I bet you automatically envision an evergreen conifer such as a spruce or fir, or an artificial lookalike. It’s what we have been exposed to and accustomed to via tradition and little or no variance.

Alternative scenario. What if when we were little we were shown right off the bat that a Christmas tree can be any tree or plant you want, and it was different each year. It’s purpose, we would understand, is to be strong enough to stand up and support itself and some super fun decorations, which make it fabulously unique. If this were the case, Christmas tree and 🎄 wouldn’t automatically go hand in hand. A much more broad idea would come to mind. Let’s take on that alternative scenario now, with respect to what strength stands for. This is what the #sportsbrasquad is about. Simply providing the world with more exposure to the variety of packages that strength comes in, while at the same time teaching ourselves to feel good to look good, not always vice versa. Variety. That’s the key word here. 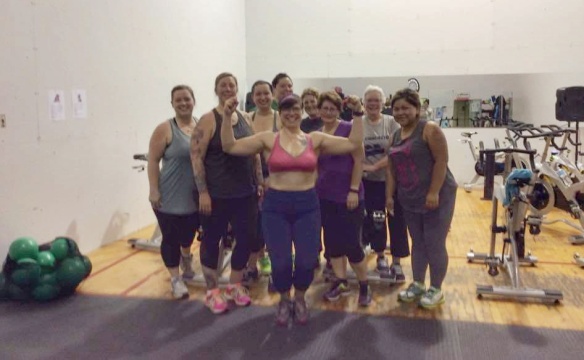 The #sportsbrasquad works because there is power in numbers. Support. Camaraderie. VARIETY before our eyes. Throw in some sweat, laughter and endorphins and there you have a step in the right direction. A big step out of the comfort zone that can lead to so many productive things, such as positive self-talk, the chance to inspire yourself, someone else or both, or a conversation that backs this whole movement. 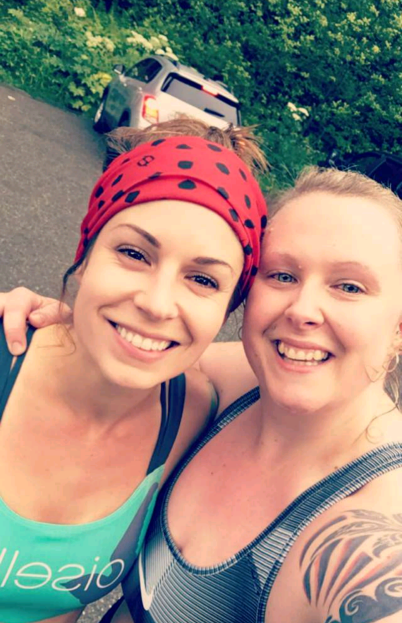 On Saturday I arrived at our group run to find ten women already there. More came. Most got out of their vehicles wearing shirts or jackets. The vulnerability level went from an 11 down to a 10 and we all began chatting and feeling out the situation. Fast forward two minutes. We are taking group pics, shirtless. Fast forward another, no one is freaking out about a reporter showing up because we are together and rallying for something important, even if feeling hesitant. Now we are running. I see people pair up. I see people getting acquainted. I see women running back and forth, checking on friends or making sure nobody is too far back. I hear again and again how liberating and literally cool our physical activity is on this muggy evening. How enjoyable and empowering sweating is. 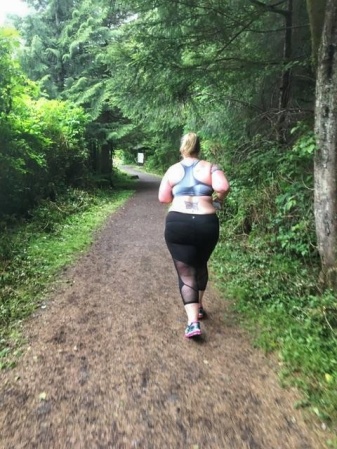 And now we are back in the parking lot, hollering at the girls finishing up, throwing out high fives to people we may have never met until today and SWEATY HUGGING. Oh fuck ya. Not just some chicks running around in sports bras!!!

Lets try our best not to see this movement as a struggle. Get fired up and consider it as doing society a favour and helping shift the perspective of strength and fitness. Do it for yourself, your daughter, sister, mom, best friend and neighbour. The guys too, they arent exempt from insecurities or stereotypes. Of course it’s not easy. Change is never easy. But the #sportsbrasquad is a change maker and we are doing it again really soon so stay tuned. 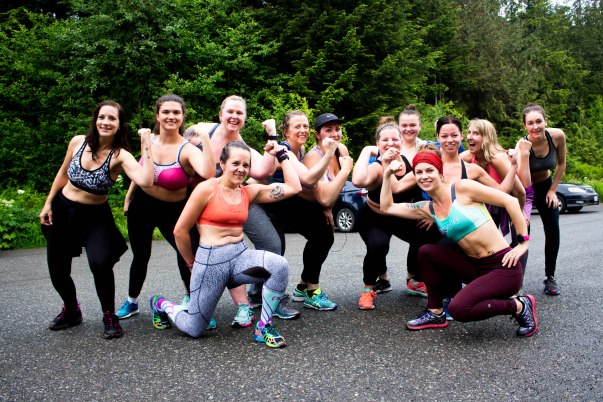 3 thoughts on “Global #SportsBraSquad Day! What it is, and why it matters!”