Wooooo!! What a sweet weekend!

First of all, no travel delays! Yay for spring! I got to Vancouver on Friday around five and after some catching up with my BFF, we went for ritualistic Thai food with Becca and Tanner. And laughed our balls off.

On Saturday I got out for my pre-race run, which I love! Lifelong Endurance always schedules 20:00 of easy running followed by strides (I did four). This always leaves me feeling fresh and ready to run at pace.

Later that day I went to the expo at the Convention Centre and it was BUSY. I was surprised I had to wait in line just to get into the exhibitor area. If you get to Vancouver before Saturday, go to the expo earlier! I believe it was open since Thursday. It took about twenty minutes in the line, and once inside I was efficient and grabbed my bib/packet, went through the chip checker and then straight to the race shirts. The shirts have a sweet course map on the back! Too bad the little volunteer accidentally gave me a men’s, but I will chop it into something I like. I went to the RUNVAN booth because they inboxed me on Instagram that they had a surprise for me! A $50 gift card to Mahoney’s!!!! So grateful! This expo is sweet! If I had been in the mood for shopping around and expo’ing hard, this would have been a really good expo to do so! Before I left I grabbed a free transit pass (best thing ever for race morning) and the famous blue BMO gloves!

At 3pm myself, Jess (@forminfocus) and Rita (@chopsticksdiary) were hosting the WeRunSocial meetup just outside the Convention Centre at the Olympic Cauldron. We were there for about forty-five minutes and got to chat with a dozen or so people about what they were racing the next day and how stoked everyone was. I wish we took our photo before some of the others had to go!

Next, back to home base (Sarah’s) for hard chill time. Got my kit ready for the next day, ate way too much food (dumb) and went to bed early. Look at my number! Anyone who knows about yoga will love it! The weather was supposed to be warm (so for me, hot) so Volee crop seemed appropriate. 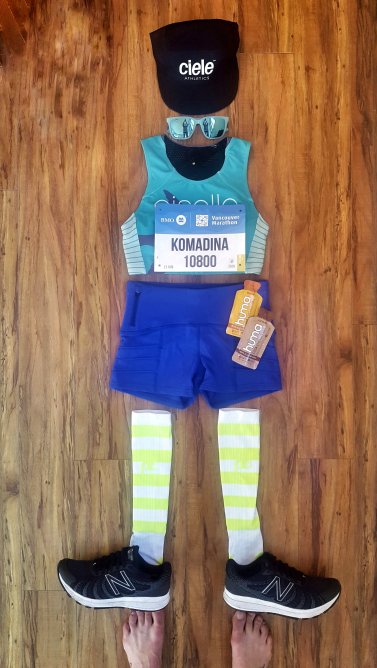 I got up on race morning at 4:15, ate my quick oats, drank some Nuun and got dressed. I skipped coffee this time to see how that would go. Around 5:30 I headed out on foot with my gear bag and transit pass and jogged to the Round House Skytrain station from Sarah’s in the West End. I packed a long sleeve, hoodie, toque (just in case) and protein bar. Half marathoners are instructed to get off the train at King Ed station and then volunteers tell everyone where to go. I joined the sea of people walking towards the start in Queen Elizabeth Park and stayed relaxed along the 10-ish minute walk.

Once at the start, I checked my bag right away at the UPS truck that corresponded to my corral colour (indicated on the bib), hit the porto-potties and got to my warm-up. I did ten minutes of easy jogging around the parking lot at Nat Bailey Stadium, then drills and strides, and lastly some light stretching and leg swings. Then it was time to go to the corrals!! I was a bit thirsty and forgot my Nuun bottle at Sarah’s when I left, so that had me a little irritated but I promised to take fluids at every single aid station and moved on with my life. Lol.

While walking to get into the corrals I look over and I’m basically walking with my friend Mary. She was like, “hey” as if we’d been together the whole time ahahah! We had a hug and a good luck, and parted ways. I found out later that Mary killed her first half marathon!!!

In the corral I felt nervous. I saw Steph (@anygivenrunday, who’s fast as lightning) and immediately thought, oh my God why am I in the yellow corral? But then I thought, shut the f*ck up, brain. I’m in this corral because it corresponds to my estimated finish time, and I am ready to run faster than that! (Registration was months ago, I wasn’t sand-bagging, my fitness is just better than it was when I signed up!)

Ditched the throw away shirt and it was go time. The first 3k of this race is a huge downhill. Everyone seems to run fast. My race plan corresponded to an A goal of 1:44:xx and a B goal of 1:45:xx (plus other subsequent goals), and the 1:45 AND 1:50 pace bunnies were running way faster than me and I could see them up ahead. I told myself to not get sucked in anymore than I probably already was and run my own race.

Once crossing the Cambie Street Bridge into downtown, I could have done a better job of dialing it back. I still stayed present and aware of my body, breathing and heart rate, but I should have slowed down a tad. After the section by Science World and the little out-and-back was done on Quebec Street, it was time to make the left turn onto Pender through China Town. I was reminded that even though that hill isn’t massive or anything, it’s still significant. I slowed down and tried to keep things under control, then once the hill came to an end I picked it up a bit. It was already getting challenging to keep pace and I was only around 8k.

I took my first gel and registered that what I considered “section one” was done. Right on. At the 10k mat it was starting to feel harder than it should, and my legs just did not want to run faster than 5:05-5:10/km so I did a little surge to jog their memory and it seemed to help. Once we got into Stanley Park the shade was great but I was once again reminded that running at effort on those hills is very challenging. The last time I ran this was back when I didn’t have much experience and I definitely didn’t have an eye on pace!

Anyways, I definitely felt my lack of sleep (I don’t think I slept well for at least a week before this) and this is where I really had to start negotiating with my mind. Keep pushing!! Fight for what you want! Around here is where I planned to take a second gel – the caffeinated one. I literally forgot! I didn’t even remember this until like an hour after the race!!! Such an unfortunate mistake, it likely would have helped SO much!! No wonder I was fading.

When we got out of Stanley park back onto the Seawall and into the sun, there were 5k to go. I commanded my body to just get uncomfortable and find a rhythm. It kinda worked, with some ups and downs, but I was running out of energy. Missing my gel probably had SO MUCH to do with it! Argh! Live and learn.

The transition from the Seawall back to pavement is on a path, and I vividly remember running this part of the race in 2014, where I got a huge energy boost. I dug as deep as I could, and it really helped to see my Volee teammate Annie and the East Van Run Crew at the 20km marker!!! I forced myself up Denman and around the left turn onto West Georgia. I am almost done!!!!! Slight left on to Pender…and then…I saw on my watch 1:43:xx…OMG! Go, go, go!!!!! I FORGOT THE FINISH STRETCH OF THIS COURSE IS SO. FUCKING. LONG!!!!! First I thought, get there for 1:44!!! But then I realized how far I still was from the finish arch and it wasn’t possible, so I said GET THE 1:45!!! This was the first race I can remember where I had nothing left for kicking it to the finish. I could NOT run faster. But I made it!!!! 1:45:49!!!! OVERJOYED! Someone had SCREAMED my name as I was coming down the fan zone and I later found out it was my old buddy Joe! Spectators are unbelievably motivating!!!

I saw Steph almost immediately after getting my medal (and then again after getting my gear bag). She nailed her race! The medals are awesome and have the same course map on them as the event t-shirts. Love! I got a juice box, water and a banana and doddled my way out of the finisher’s area to the half marathon gear pick-up. I was tired, but felt fantastic! Should have grabbed a bag of chips, too.

Eventually, Sarah and I found one another and had the best slow-walk back to her place in the sun, planning our brunch and beach day with my cousin-in-law Hannah. 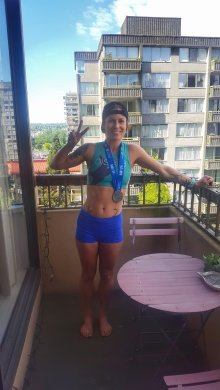 The rest of the day was spent eating, lounging and then meeting up with my old boss, the legend Serge, for dinner on the Mahoney’s patio! Sarah and I took the Aqua Bus back home across False Creek and that was pretty much the perfect day. 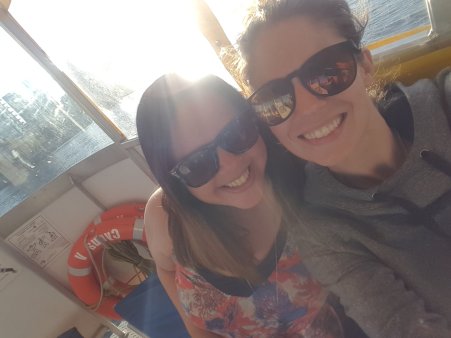 I wish I had made it back to the finishing area to cheer in the full marathoners but my legs and problem ankle were not willing. Congratulations to everyone who ran the 8k, half marathon and full marathon!!!!

Here’s how I made out:

BMO Vancouver Marathon weekend is the shit! Vancouver is spectacular as it is, and the courses for each distance offered are beautiful, scenic routes. The expo is big and exciting, the swag is great and the entire event is extremely organized. It’s easy to get to the starting line via the Canada Line, which is key. There are more than enough aid stations, great crowd support and an exciting finish line and street festival! The medals are always cool, too! I haven’t run the 8k before, but both the half and full marathon courses are great; some challenging hills but majority flat or rolling.

I had a great day this Sunday, and an awesome overall weekend. The plan is to be back again next year to run one of the races, depending on what’s happening in my running and school life at that time!

What does this mean for Operation: PUMP up the JAMmie? It means I’m on track! Coach Andrew says we’re right where we should be at this point. Now for twelve weeks of very hard work! Thank you, Lifelong Endurance! Next check-in race: the Skeena River Relay on June 2nd with my team, the Gooeyducks! Talk soon.