I’ll start with the fact that I really LOVED this event! Since the week prior I was sick as a dog, I wasn’t too sure how it would go, but by the time race day came around I felt a lot better and my Friday and Saturday runs felt good. I wasn’t worried.

Bib/shirt pick-up was fast and easy at the Vancouver Convention Centre and the expo was very small. We were in and out within just a few minutes. I actually like the t-shirt and will wear it in real life after I take it in at the bottom. Why do shirts flare out at the bottom!?!?! It’s pretty plain but I love me a white t-shirt!

In the afternoon I managed to get in a SOLID nap. For dinner, we went to a Japanese restaurant and I stuck with a safe meal of edamame, tofu and rice. I also avoided sugar all day with the help of Karmen. Once I laid out all my gear for the next day, it was early to bed.

By morning, I decided to go with minimal clothing. My fear of being hot is very real ahaha. I love the new Tracksmith crop that Karmen picked up for me when she was in Boston for the marathon, but it needs a bra underneath and two layers on a warm day was terrifying! It was Global Sports Bra Squad Day anyway, so I stuck with just a Lulu Energy Bra. I’m so glad I didn’t wear a shirt, I would have actually died.

I was up at 5:20, then left the house around 6:15 to meet my buddy Kelly (who killed his first half marathon in under two hours) and share a cab to UBC. The starting area is by Thunderbird and it was an easy place to get dropped off, as well as a really good area for a race to start! I managed to get in line for the bathroom before it got crazy. In my opinion there weren’t enough toilets. They were in small groups in different spots here and there I think? Anyways. So many great places to warm up like along Main Mall! I did a jog, drills and strides. Today I felt relaxed and calm about the race.

I got into the red corral around 7:20 and saw my friend Thai and some of his November Project Vancouver crew while waiting for the race to start. Then we were off! Here’s the profile:

My general plan was to run the first 7k at ~ 4:59/km. After 7k is when the giant downhill starts happening. I was a tiny bit fast at first in the initial 3k downhill, but I held back, and then a little slow on some of the following uphill splits for the next 4k. It didn’t matter, it all evened out and I was at a 4:59 average pace after 7k!

I felt very patient and relaxed and tried to keep my heart rate in check. People around me were huffing and puffing and wheezing after just a few kilometers! It was already getting warm.

The next part of the plan was to run kilometers 8-12 around a 4:57/km pace. I tried to stay in the shade and felt VERY thankful that I decided to bring my handheld Nathan. Still, I took water at every aid station except the first. Somewhere in kilometer 8 I took a gel and it sat fine.

At times I had trouble running that ~4:57 pace. It felt easier to either relax into ~5:05/km, or to pick it up and flow around ~4:50/km; I couldn’t seem to find the middle. If it had been cool out, I would have taken a chance and just ran in the low 4:50s. But it was warm and I was afraid of burning out. Regardless, this 5k section went well!

My next section was 13-17k. Another 5k chunk that I wanted to run around 4:56/km. In kilometer 13 there is a short hill from Marine Drive up on to 4th and it was hard! I also didn’t want to send my heart rate buckwild. A downhill followed and I regrouped. Aside from the split with the hill, good section!

This next part of the course I just wanted to put forward my best effort until reaching the crest of the Burrard Street Bridge, which counts as home free in my books. Turning up Maple Street was challenging; I was now hot and tired, but the end was near! It was time to tackle the bridge. I saw East Van Run Crew at the turn off of Cornwall onto the bridge and ripped open my mocha Humagel hoping to add to the boost of seeing them. The bridge didn’t feel hard back in 2016 during the Vancouver Marathon, but I wasn’t running that race with any goal but completion. This was tough! It’s about a kilometer long, uphill with zero shade! I ignored my watch, swung my arms and smiled, and I might have been running with my eyes closed LOL.

The crest of the bridge is at 19k. Two kilometers left. I told myself every second counts and to run 2000m on downhill/flat with heart and caffeine. I was hurting and definitely didn’t have the best energy, but I was able to spin my legs for a 4:40 and 4:38 in 20 and 21, respectively.

At the 21k marker I had a thought..“fuck, am I gonna be that person who hits the deck in the last hundred meters?” 😂😂😂 WTF brain!?!?! But I saw Karmen and Adam and thankfully made it! Thirty-three seconds shy of my sub-1:45 goal, but still a personal best!!! I can’t wait to run a cold Fall half marathon!

I’ve always said I hate and suck at running in the heat. Not today mofo. 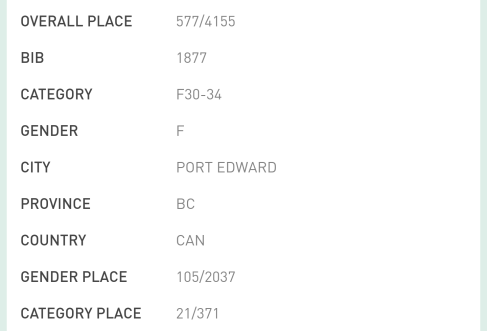 After crossing the finish I switched bibs (thank you, Adam!) and jogged the 5k race for a cool down and some extra mileage.

Karmen, Adam, Jess and I found each other and then we ran into Steph, who won the 5k! Quick pic, retrieved my gear bag that I checked at UBC, and then it was time for a shower and FOOD. We walked home along Pacific and got to support the half marathoners who were still coming in. This is also a section of the Vancouver Marathon and it brought back memories of 2016!!

The Scotiabank Vancouver Half & 5k weekend was AWESOME!!! Yes, it’s bound to be hot, being a late June event, but the course is awesome (yet a little misleading at a glance) and I friggin LOVE running in Vancouver! This course is beautiful! The scenery is amazing and even though the Burrard Bridge is one of the hardest parts, it’s so gorgeous running over bridges!!! I would have liked to see at least a couple more water stations, especially considering the history of the weather at this event, but the aid stations were by no means scarce. I just think a few more would make a huge difference. There was some great spectator support and the finish area in Stanley Park is fantastic!! Sweet medals, decent shirt, and perfect start and finish areas! You should run this race next year! 🙂

I’m just over four weeks out from the marathon. Yes, a faster half marathon time would be a huge confidence booster, but I still feel very happy that I wasn’t affected by warm temperatures the way I thought I would be. Also, it’s comforting to keep in mind that I am running a downhill marathon for a reason; to support my goal. I feel good and I’m excited!!!! Peeaaaace.

3 thoughts on “Scotiabank Vancouver Half & 5k!”