This was my second time taking part in the Tyhee Lake Triathlon, and my second triathlon ever. Last year I completed the sprint distance and this year I came to tackle the Olympic distance. That day last year, I decided this was the best endurance event I’d ever experienced in Northern BC, and this year that decision was totally solidified!

The Tyhee Lake provincial park is AWESOME. Some may not think that camping is ideal for race weekend accommodations, but the campsite is beautiful, well-maintained, and there are showers and some flush toilets as well as standard outhouses. It was so nice to be staying AT the event.

On Saturday morning I woke up at six and saw that Erin was already awake. Immediate excitement!!! We ate breakfast right away (I had granola, a Happy Planet chocolate protein smoothie and a banana with peanut butter) and then started to get organized and go to the bathroom 500 times. Check-in/bike check was all going down from 7:45-8:30 and then the Olympic distance event started at 9:30, so we had lots of time.

On my body I was already wearing my new Smashfest Queen triathlon shorts (LOVE), sports bra and Garmin, which would go under the wetsuit for the swim and then stay on me for both the bike and run.

Erin and I went down to the event area (giant parking lot) with just our bikes to check-in, get our race numbers and swag-bags and then line up for the mandatory bike check. I got a fresh new bright yellow swim cap since I’d be wearing a full wetsuit and the number written on my arms and legs wouldn’t be visible until after the first transition. I love free shit ahahaha.

After our bikes were given the once-over we found a spot on the racks in the transition area to hang them up. Then we went back to our site to get the rest of the gear and set up our towels beneath our bikes with everything needed after the swim. A helpful tip I remembered from last time was to put my sunglasses and SpiBelt inside my helmet so forgetting them couldn’t happen.

At 9:15, I got into the lake to swim around and try to get the initial nerves out. I put my face in and blew bubbles slowly, swam a short distance out and back and just hung out in the water for a bit. I really didn’t want to have the swimming anxiety today!

Ali, the amazing race director, did the countdown on the mic and we were off. I didn’t feel nervous and was prepared to start slow and get into it. No freaking out was happening and I wasn’t hyperventilating or anything, but I couldn’t seem to swim more than a few strokes without needing to breast stroke and try to slow down my breath and heart. Maybe it was just adrenaline. Anyways, I wasn’t worried and just kept going forward, and once I reached the second buoy (500m) I felt almost normal. At the completion of the 750m triangle, we had to stand and go around a cone before continuing for the second lap. Here, I knew I was good to go.

Wearing silicone earplugs seemed to really help (thanks for the tip, Rheannon) because normally when I get out from an open water swim I am SO dizzy and nauseated. I got up the grassy hill to the transition area without issues and saw my friends from Telkwa cheering along the way! Wetsuit removal went smoothly and into my bag I chucked my cap, goggles and earplugs. Quickly dried my feet, threw on my socks, shoes, sunnies and Spibelt, fasted the helmet and un-racked my bike. Wooooo!

I don’t do a ton of cycling, that’s for sure and forty kilometers felt kinda long. It was very tiring, but it was so enjoyable! The bike course is gorgeous. It’s a rolling road and you can see the lake, cows and beautiful countryside. I ate a Clifbar immediately and then stuck with my bottle of Scratch for the rest of the ride for fuel and hydration. Quite a few people passed me on the ride, but I didn’t care; I was already stoked for the run! Sorry to the girl who I told my vagina hurt 😂😂😂😂😂

Coming back to the transition area upon completion of the bike segment is great because it’s downhill. 40k – 1:35:18

After I re-racked my bike and removed my helmet and belt, I grabbed an Endurance Tap, threw on my hat and got back out there for my favourite part! I don’t have the clip-in cycling shoes so didn’t have to do a shoe change. I’ll get those eventually..

My legs felt better than last year, that’s for sure! After spilling half my Endurance Tap down one leg, I told myself to just get the first kilometer done before making any judgements about how I felt. The first split is ~25m gain (the big hill that was so lovely at the end of the bike), which is brutal coming out of the transition!! I saw Corey on this hill and we agreed it was a cruel joke ahaha. After that, I felt okay and kept chugging forward. I took water at the first two stations and again at the third where there were sponges as well. I stopped for a sec to properly drink a cup of water and get a sponge. This was somewhere in kilometer four and I had to tell myself to suck it up and do this.

Erin and Shannon both passed in the opposite direction before I reached the 5k turnaround and it was so uplifting to see my friends!!! I started to feel really good and even though it was hot and sunny, I realized I did not give a F. 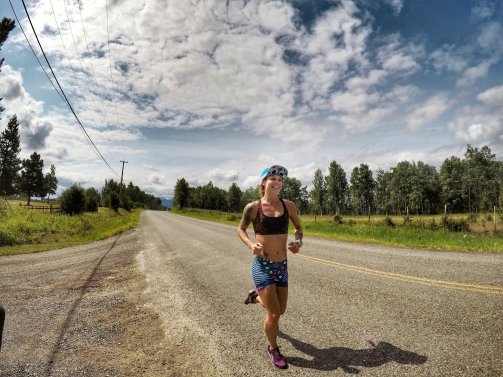 I passed a couple of people, including some burly men and it was pumping me up. At the turnaround, I got another sponge and got in the fuckin zone.

I passed more people in the second half of the run and was feeling like a million dollars, running on gumby legs or what Shannon calls meat sticks lololol. My legs were moving fast underneath me and my arms were swinging. I felt great!!! I saw Jessie and Matt too: all Piranhas accounted for! 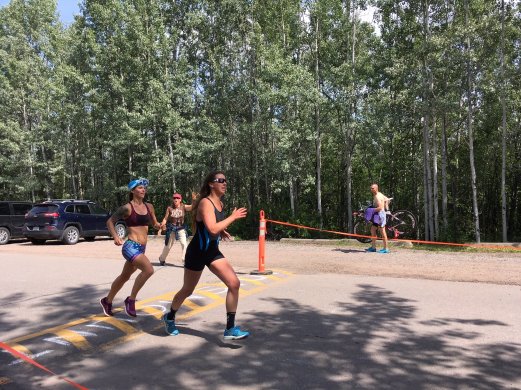 I caught up to Shannon and her flowing hair and we crossed the finish line together, under three hours!!! What an amazing feeling!!!! My time for the run was actually the fastest women’s run time!! 10k (though my watch shows it a bit short..) : 50:48

This event is amazing! It’s so well-organized with great communication from the director. There is so much support on the course, especially for the swim and the run. The location is perfect and so is the vibe, it’s relaxed and not hard-core and intimidating. The swag bags are unreal! Afterwards, there is a delicious barbecue, tons of prizes and a beautiful lakefront to hang out at with friends/family while listening to the awards!

I’m so grateful that my friend Breeann encouraged me to take part in my first triathlon here at Tyhee lake just one year ago. I now LOVE triathlon! Seriously, I love it as much as I love running I think! Ironman 2021 (when I’m done school and can train), mark my words!!

I highly encourage you to consider participating in this event next year if you live in the area or will be nearby. There are various distances, including the “try-a-tri” which includes a 300m swim, 10k bike and 3k run.

This was one of my favourite days of my life and I’m thirty-three years old! I think it’s safe to say that the Tyhee Lake Triathlon is FANTASTIC!!! Thank you, Ali and all the volunteers who make this happen!